It's a lovely day out today. It's hard to believe that Easter is just over a week away. I completely missed Valentine's day and St. Patrick's Day.

I have to say that I outdid myself on the kids' Easter gifts this year. We don't do anything big...when they were little it was usually a coloring book and crayons, or a game. We went nutso one year and got them MP3 players. They held a whole 56MB, which back then was really something. And it's been kind of downhill since then. For the past few years I've resorted to buying clothes and they really don't like that. And I certainly should know better given my clothes shopping experiences with them. Me: "Hey, isn't this neat??" Them: (At best) Silence, followed by a short roll of the eyes. (At worst) "Oh Mom, that's hideous."

Anyway, I found a great frisbee for DS that has an LED in its center, so you can throw frisbee at night. He loves frisbee...and since this boy barely opens his eyes till afternoon, it should suit his needs. I think maybe he's a vampire. Except that vampires give me the impression that they have to be tidy. Wouldn't want to risk tripping over shoes and underwear as you run to your coffin to beat out daybreak. So he's probably not one of the undead yet.

I found a great running shirt for DD on sale at Dick's. She's gonna love it. Crazy, swirly colors and dots. It's just her style. I hope....Puhleeze let it be her style.

Here's my rabbit, and it was WAY too much fun. I know it's kind of wrinkly, but I wanted to get it scanned before I started sewing it into something... 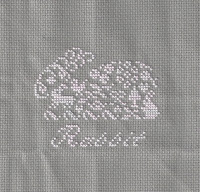