Line of the year

Every now and then someone says something that becomes unforgettable to Dave and me. It's almost never from a movie, book, or famous speech. It almost never comes from someone famous for writing or speaking. It's usually just some weird bit of conversation that we overhear and it makes us look at each other and kind of smile.

There's this very cool place we drove through on the way to Lake Lure, called Chimney Rock Park.

So one day we decided to drive back there and go for a hike, with our destination being Chimney Rock itself. (See the photo - I love America, but I think that the flag made it tacky. That's just me) It had trails that ranged from easy to moderately difficult, with different and really gorgeous vistas along the way. It promised to be a neat day. So, off we go on our hike. The first portion of the hike took us past some amazing scenery, because we were going along the highest trail. And once you get near the top of the highest trail, you come to the top of an amazing waterfall.

It's kind of flat at the top, and because it's been so hot and dry, not a whole lot of water was going over the falls and there were plenty of flat, reasonably safe rocks to sit on.

So, here are all three of us coming into this clearing, and there's a man sitting on the rocks, with a little pile of...oh, I don't know...twigs and stuff sitting near him. He's practically naked, lots of tatoos, and long black hair in braids.

And we stopped and looked. At our local national park, Fort Necessity, there are interpretive staff who dress as authentically as possible, so we sort of thought he was a guide or something. But he just sits there, striking matches to light his pile of unusual twigs.

And then from behind him comes a woman, dressed normally, who looks at him and says:
"Don't you do that ritual here."
And he responds:
"I'm not doing my ritual."

Now I know that you probably had to be there, but it was so very weird. Take out "do that ritual" and substitute something mundane like "take off your socks". That's what it was like. Typical husband/wife squabbling, not over socks, but over almost-naked-ritual-twig-burning-in-public-places. Hm. Maybe I don't have it so bad. I'd rather squabble over socks.

Funny - I read all of the informative trail signs along the way and I don't remember one single thing that I read, but I'll always remember Ritual Guy.

A couple of our photos: 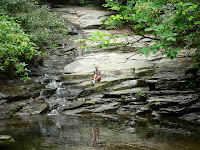 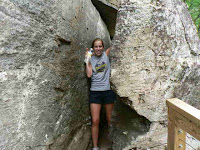