Yay, yay, yay! On Sunday I finished this: 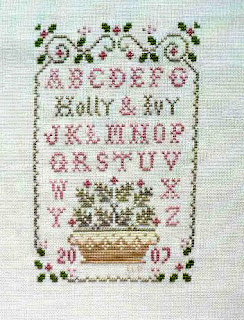 It was for a Cross Country Needlework SAL for a Yahoo group. September's designer for the SAL is The Workbasket. I have high hopes.

Honest to goodness - I'm so glad that I finished something this summer. Yes folks. It was ONE DAY before Labor Day, so it still counts for summer. I just hope I don't end up putting away my stitching with my white shoes.

Because my life has been a whirlwind. Besides work, high school soccer has been occupying the bulk of my time. I keep telling myself that it's over in just two months and then I'll wonder what all the fuss was about. Being booster president this year is a ton of work, mostly because it's a new coach and he leans pretty heavily on the boosters. Next year I'll become a nameless face in the crowd again.

And Colleen is trying to double up on sports this year, so she's been running for the cross country team, too. Honestly, I don't know how she does it. I'm exhausted just watching her. Needless to say, I've been keeping an eagle-eye on her, paying special attention to her nutrition and state of health.

John seems to be having a great time at college. He ran in his first college meet on Saturday, and it was quite an eye opener. Although it's much different than high school, he's feeling like that's a good thing. He was reasonably dedicated in high school, but these runners are serious, and it's rubbing off on him. If he stays healthy, he's going to improve dramatically.

Academically, he says he's managing his time well. Each email ends with "Well, I have to go read." Or "I'm going to study now." Do I believe him? I'd like to. He has one difficult class, but he says the rest are pretty easy.

Rec soccer begins this Saturday, and I have several games to referee for one league in the morning, and another league has asked me to teach a clinic in the afternoon. Then I'll do a couple of Traveling League games on Sunday. So that's starting off with a bang as well. And people keep asking when I'll take the PIAA exam to start working High School games. Right.....

Then there's the house that we just bought for my mother-in-law. She needed a house with a single floor, so we looked through the spring and summer, and came across a little house in a nice neighborhood. But the house was part of an estate, and little did we know that the sellers would leave roomfuls of things behind. It's a disgrace, and I'm heartily sick of cleaning it up. And I'm even more sick of listening to my MIL go on and on about it. More later.
Posted by Lee at 9/04/2007 09:23:00 AM