Last post I mentioned this house that we just bought for my MIL. And how it was part of a woman's estate and how the family left the house full of stuff. Well, except for the stuff they wanted, like cash, jewelry, a car, and some creepy doll collection.

But it breaks my heart that they left these things behind: 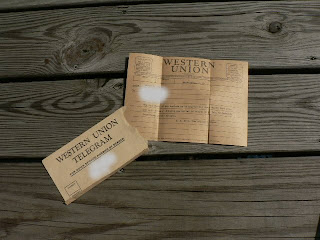 Yes. That's a real telegram informing parents that their son was killed in World War II. The soldier was this woman's brother. She evidently kept the telegram and subsequent letters after her parents died. Left behind. 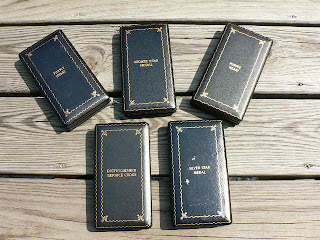 And those are the medals that this young man was awarded both during the war and after he died. I didn't open the cases up for the photo because there is too much identifying information engraved on the medals. He was a heroic young man, and the letters along with the medals are a testament to his bravery. Two purple hearts, the bronze star, a silver star, and a distinguished service cross. Left behind.

I didn't photograph this woman's photo albums, scrapbooks, or her wedding album that nobody cared enough to take.

Now, we gave them the benefit of the doubt and thought that maybe they just didn't know about this stuff. Called their attorney and told them that we would gladly give them these documents and photos. That was over a month ago, and we didn't get even a peep in response.