Hey - don't think that I'm intentionally ignoring your comments! I keep reading them and then thinking to myself that I need to respond with a note or two, and then I just forget or get side-tracked. But so help me, I'm not an ignoramus.

Any-who. Here's the deal about the Grill Pan. 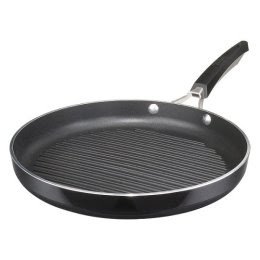 I didn't go expensive or professional or even heavy. Since it was a new tool to me, I just wanted something of adequate quality and at a reasonable price. Then if I didn't like the grill idea on the whole, I wouldn't feel like I had invested a small fortune on a kitchen appliance that would just take up space, gather dust, and eventually be donated to Goodwill. (like my bread machine, pasta maker, springform pans, and apple peeler to name a few) I had read good things about this Calphalon pan that went for $39.99 at Target, so I jumped.

The first meat I cooked in it was marinated chicken breasts. Easy, hard to screw up, and usually salvageable even if you really screw it up badly. They turned out reasonably well, but if you try this type of pan, avoid these two mistakes that I made from the get go:

1. Make sure the pan gets hot before you add the meat. And I mean hot. On my electric stove, I don't usually fry meat in my pans much above Med or Med High, but this pan needed a high heat to be more grill-like. That required patience and when I'm hungry, patience is in short supply! But the results are worth waiting for.

2. If you marinate the meat, let most of the marinade drip off before you add it to the pan. I'd almost suggest blotting it off the meat. It's not like your outdoor grill where excess marinade just drips off and down into the flames. It pools in the base of the pan, and because the ridges aren't particularly deep, the excess marinade acted kind of like a gravy, boiling the meat rather than grilling it.. Once again, the "grilliness" suffered.

So, with those lessons learned, my next few meals were were awesome. (fish, chicken, and pork) I even experimented with sliced mushroom, zucchini, and asparagus, all with great results. (I cooked them alongside the meat as it was finishing)

I haven't tried it in the oven yet, although it says that it's oven-safe. I have this idea to grill some apples then top them with brown sugar and oatmeal and bake them...Maybe I'll use that apple peeler after all.