I promised myself that I'd finish that tree over the past weekend, and I did it. Mostly. I actually finished it during my lunchbreak today. There was a moment of panic while I was stitching and taping the chart pages together and guess-timating which stitches had been left off the chart. I realized that if I hadn't guessed correctly, the tree would be wonky and I'd be screwed. But fate must have been smiling on me Sunday, because it all came out perfectly. Or maybe it was my dad. This Sunday's mass was for my dad, and if anybody was a meticulous hobbyist, it was him.
So here it is - The Tree in the Tree of Life. 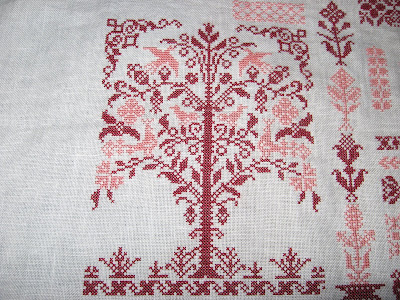 Unfortunately, I wasn't as accurate with the top alphabet. 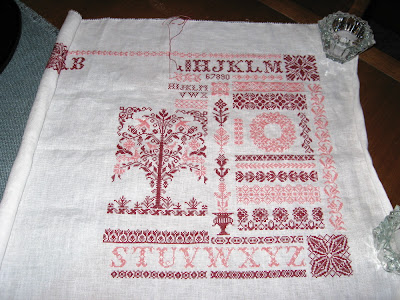 Who would have guessed that there should be an "I" between the "H" and "J"? Where was my head? Looks like I have some ripping to do. But really - it feels minor after finishing that darn tree. And then I'll put this away for a little while and work on some little, cruise-friendly stuff. Maybe an ornament or two, and I have another block exchange in the works, and several little LHN charts.

This time next week we'll be boarding a ship in Miami.