I've had to remind myself over this Mother's Day weekend that adjusting to things that are out of my control are a huge part of being a mother. Actually, it's a huge part of being parent in general, but we mothers just seem to be better at it. Maybe it's because we have to deal with the consequences of not adjusting in a much more direct way.

So anyway, due to circumstances beyond my control, I didn't get to wish all of you a Happy Mother's Day. I hope your day was everything you hoped it would be, whether it included a big elaborate restaurant meal, or burgers in the backyard with your children. Whether it was a short phone call from someone you love who lives far away, or an extended visit with friends and relatives. Whether you had some much needed alone-time, or whether you were surrounded by your family for the entire day.

And I have to tell you - I loved this post by Ivy at Home Ec 101, because it talks about Mothers Day as a time to celebrate all women. Pop on over and read it. She certainly says it better than I ever could.

I had a long Mother's Day. Long because we drove almost two hours to an "away" soccer game, only to get there and play for about 5 minutes before lightning arrived. So they cleared the field, and waited about 15 minutes before the referee called the game off. Entirely. What?? We (referees) are supposed to wait 30 minutes after the last lightning strike before allowing the game to resume, so what was the harm in waiting the entire 30 minutes? Especially since we had driven two hours to get there. I think that the home team and the referees clearly didn't want to be there, so they just took ignored our situation and said "go home". So not fair. And we drove two hours home again.

Ah well, The silver lining is that we were home by a reasonable time, so dinner wasn't super late, and it was followed by fabulous dessert created by my fabulous daughter: 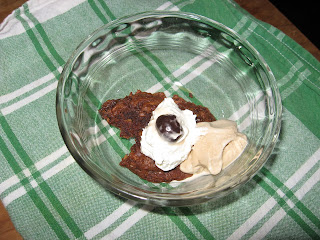 A mocha chocolate cookie with Coffee ice cream, whipped cream and a chocolate espresso bean!! It was awesome. She's the most thoughtful daughter in the world.

More adjusting...We moved John home from college on Saturday. All in all, it wasn't so bad. We packed him, loaded the van and the car, and cleaned the room all in under two hours. Not too shabby. Now I just need to adjust to the late night schedule of a teenage/college-age boy. Already I'm not sleeping, and it's a miracle that I'm awake right now. Seriously. I didn't fall asleep until 4AM and had to be up with Colleen at 6:30. He's not that noisy - it's just that the energy of the house is entirely different and I can't sleep.

You'd think that I'd have some stitching to show, but my eyes just won't focus on close things that late at night. I can't even read. So I watch TV. Top Chef, and all of those Bravo and Style channel shows. I watched a show I had recorded a while back: Masterpiece Theatre's "A Room with a View". Eh. Ok to pass the time when you can't sleep, but not great. I expected it to be much better.

I think that another reason I was sleepless was because of the upcoming anniversary party. I had too many lists bumping around in my head. It'll help when I'm able to cross more things off that list.

Oh for heaven's sake! I forgot to tell you last week that we had our ACTUAL 25th wedding anniversary. It was on May 7. Yup, that's 25 years of Dave asking. "Where are my keys?" and "Have you seen my wallet?". And 25 years of me asking, "Hey Dave, does this make me look fat?" So Dave darling, if you're reading this, I want you to know that I'll happily look for your keys and wallet for another 25 years. Just as long as you keep telling me that nothing could possibly make me look fat.

And now it's back to work. I have meeting minutes to type for our HOA. Terribly boring stuff, and I always put it off till the last minute. Drives my boss insane, but he still loves me.
Posted by Lee at 5/12/2008 11:29:00 AM