I should have known that once we were into track season, April would go by in a flash. And I imagine that May will go by even faster, with so many things to do as both kids finish their school year. Besides finishing all of her high school academic things, like taking AP exams and attending awards banquets, Colleen will still have three track meets to run, including one invitational and two WPIAL meets. John's college hosts a big invitational early in May, and we'll be there to move him out of his dorm and catch the meet at the same time. He should be running the 3000M steeplechase again.

Once John's home, I think it's going to be kind of hectic as we try to prepare him for his summer in California. But I can't talk about that right now. Even just thinking about it makes me too nervous.

We finally got Colleen's senior pictures. I was probably the last mother in Western PA to order them. It's so hard to choose, but I think we put together a nice package that kind of tells Colleen's story. 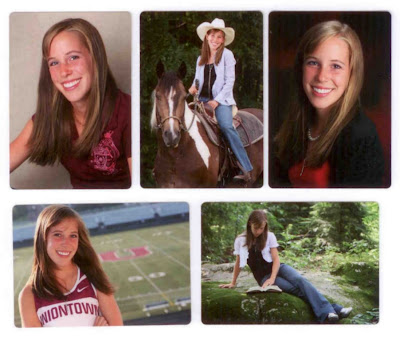 Yes girls, it's another post from me with zero stitching content. I've put a few stitches into Tree of Life, but not enough to be photo-worthy. Oh my - it occurs to me that I have two exchanges coming up soon, and they have to be fully finished by June 1. Yikes! Looks like I'll be taking some stitching to a couple of track meets....

Meanwhile though, I've seen some neat posts on fabric dying. This one was kind of neat. Her focus is more on dying cottons for quilts, but there were some nice examples of dyed linen.
Posted by Lee at 4/22/2009 08:23:00 AM