Don't you hate it when you realize that you're totally insane?

I've discovered that when I'm worried about either of my children, I don't panic, but instead I become totally obsessed with whatever is going on. And the internet feeds my obsession, because I spend enormous amounts of time online, going from website to website, trying to discern what's crap and what's factual.

I get myself in such a tizzy. I didn't get dressed till almost 3PM on Monday. That's a LONG time to sit around in your pajamas. I hardly eat, let alone cook. My poor family has had to deal with meals of leftover pizza and cold sandwiches this week. We've been out of milk constantly, and yesterday I even ran out of coffee. That never happens in my house.

Seriously. It's like I-Just-Can't-Let-Go. I worry about stuff long after my kids have stopped worrying about it.

So today, I feel like I'm finally coming out of the woods. I have some very smart and very generous bloggy friends, who listened to me kvetch and whine for well over a week and have given me wonderful advice and shoulders to cry on. You girls know who you are, and I won't say who you are here because then a million other parents of college-bound kids may start emailing you, and let's face it, I'm selfish. I'm keeping you to myself.

And I promise you all - I won't be blabbering on about colleges any more until it's all said and done and the deposit check has been mailed.

WELL, as for stitching, I took out Tree of Life last week. Here it is after I pressed it again: 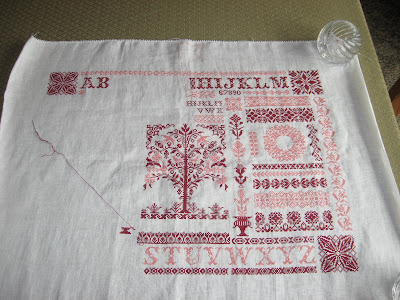 After I pressed it, I decided to put it on scroll bars, and I accomplished that, but I don't think I've put more than 100 stitches into it over the past week. Really, there was no point to taking another picture.

John had a track meet very close to here at California University, so Colleen and I went to watch him run. This time he ran the 10K event. Yes. 10K on a track. That's 25 laps. 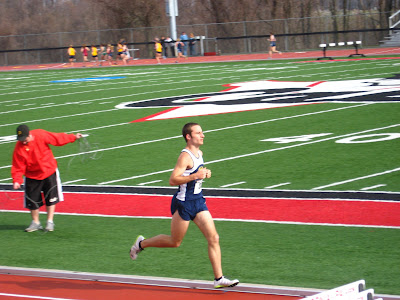 This was taken in the early part of the 10K. He didn't look like this at the end....