Either you're just being polite -

- Or you really mean it.

I remember when my parents went to Ireland years ago, and Dad took hundreds of photos that he had processed as color slides. On a rainy afternoon, they LOVED saying, "Hey, let's look at the Ireland pictures!", and they'd bring out the slide projector and screen and we'd all groan inwardly but sit through it anyway. And hope to catch a nap until it was over.

So that's the experience that I think of as I'm showing you all of my vacation pictures on this blog, and it really surprises me to read that some of you are enjoying my ramblings. Surprised, but glad, too! Well, I only have a couple more days to write about, then I'll get back to writing about my normal, day to day stuff. Wait - that's kind of boring, too. You readers just can't win, I'm afraid.

Now back to vacation. We had decided that Friday we'd go to Fisherman's Wharf. Instead of driving in, we went to a Park and Ride place and took BART into town. (Bay Area Rapid Transit), then rode one of the historic streetcars to Fisherman's Wharf. As it turns out, this one had been in service in Philly before it was sent to San Francisco. I used to ride streetcars a lot as a kid, mostly with my grandmothers and I had to wonder what the chances were that I had ridden this one back in ancient history. 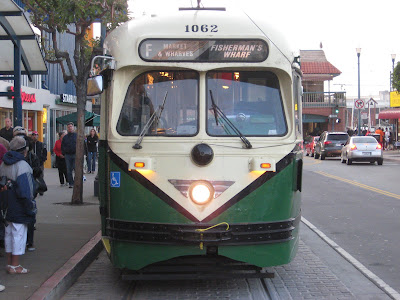 Here's my take on FW: It was like a lot like the Wildwood NJ boardwalk, only bigger. And more expensive, yet for some reason you still buy stuff. (For instance, why did I pay $4 for this cupcake?) 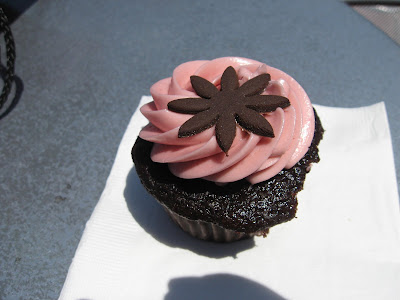 There were some interesting street performers, including one guy whose gig was to hide himself behind some leafy branches and then lean over and scare people and afterward ask them for money. I know, I know, it sounds lame, but it was hilarious and we watched him for the better part of an hour. And there was this fellow: 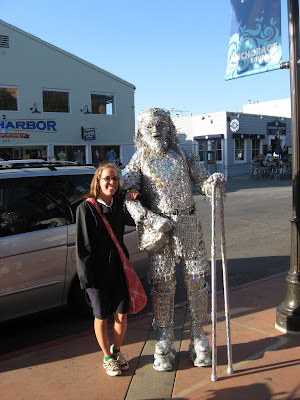 We don't know what he was, but Colleen was hypnotized by the glitteriness.
And of course, there are bars and places to eat. Dave and I needed a break so we went into a blues bar, where a very drunk woman offered to take our picture. What do you do when a drunk woman offers to take your picture? Smile and hold up your beer. 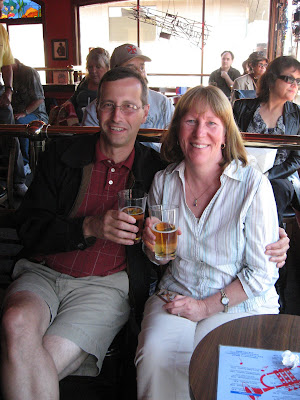 Ahhh. Vacation memories. Luckily, Colleen had left us for a while so she could do some souvenir shopping.

Shopping-wise, this was the only place that made us ooooh and ahhhhh - an adorable tea shoppe in Ghiradelli Square, The Crown and Crumpet (not my photo - this is from their website)

But at the end of the day, Fisherman's Wharf isn't worth the effort. Especially since the ride home was like this: 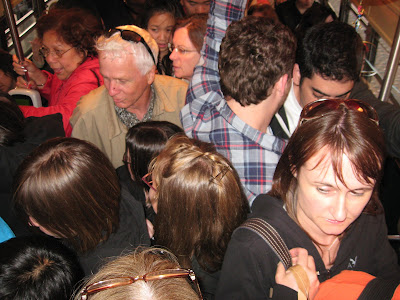 Oh - two sights that we really enjoyed that day were up the hill quite a bit. We loved Lombard Street (the worlds most crooked street) and the other street - the world's steepest street. 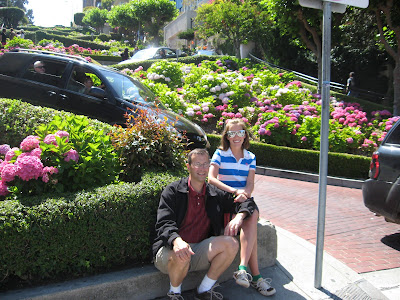 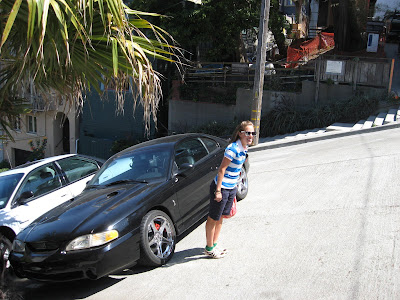 Tomorrow I'll show you the last of the vacation pictures. Colleen and I left Dave behind in Pacifica and spent one more day in San Francisco. (Where I found the Giant Wall of Silk)
Posted by Lee at 7/09/2009 09:11:00 AM