On the one hand, I love autumn. There is so much to do. So many choices! It's hard to decide some days.

On the other hand, as the days get shorter and the leaves fall, I get so sad. Winter is so long here, and I know I won't see those leaves again till way into May. Just looking at my porch furniture sitting out there all lonely and wet and grey makes me blue. Ah well, it happens every year and every year I manage to get over it. I guess it means that I just have to move my stitching inside. At least my stuff doesn't blow away when I'm on the couch!

First up - here is my entry to Darling Anna's Swirlygig challenge. I decided to go "big" and stitched it on 11ct. fabric with #5 perle cotton. I was very happy with it! It was fun to use that big fabric, it was just the look I was going for, and the finish was easy-peasy. The more I look at it, the more I'm rethinking that bow. It's simple enough to remove, though. 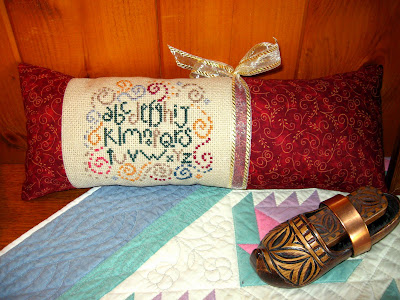 I stitched a second entry, too, just because I was having fun fooling with the colors. I stitched this on some PTP opalescent pink lugana, using DMC in spring colors. I just couldn't come up with a good finishing idea though, and luckily there was a category for UN finished projects. I know that the photo doesn't look pink. No matter how I tried to edit the photo, the fabric color is still way off. But you get the idea. 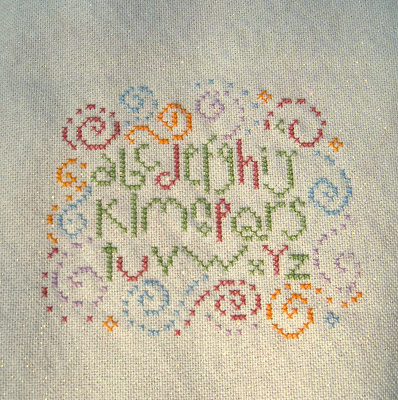 I didn't win either of the categories, but the winning entries were pretty darn wonderful, so I don't feel badly about it at all. It was a super exercise and it was rewarding to take a design and make it my own. Sometimes it's fun to do a design exactly as it's presented, but sometimes it's even more fun to use a design as a springboard to something else that's even better!

Last weekend I finished this FUFO that's been around for a while. And by "a while" I mean "a decade". It's finished as a cube, wrapped with a wide black grosgrain ribbon. 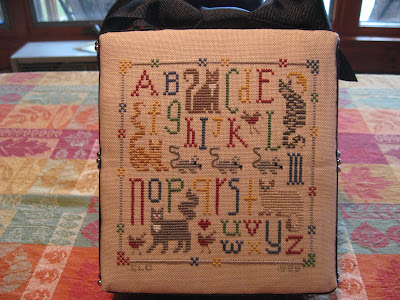 Right now I'm working on PS's "Autumn Leaves". I needed something seasonal to stitch, and I've had this kitted for quite a while. It's moving along nicely, and I'll have a picture to show you as soon as the sun comes out.

In non-stitching stuff, life has been very busy. We went to one of Colleen's cross country meets last Saturday. It was just outside Columbus and if either of the kids run within a 3-4 hour drive, we usually go. It was her first 6K (up till now she's only run 5K's), and she ran very well. Came in 11th out of about 150, and looked and felt very good at the finish line.

This Friday she'll run at the All Ohio Championship meet in Delaware Ohio, so we'll go watch the meet and then bring her home for Fall break. I'm SO GLAD to be bringing her home for the long weekend. I miss the brightness she brings to our home.

John's fall break is the following week. He has one of our cars at school, so he drives himself back and forth. But he may not come home, which I understand, although it also makes me a little sad. If he doesn't come home over break, I may decide to drive there and take him to dinner, because he's turning 21 this month. Wow. Now I'm officially old.

All of his cross country meets have been really far away this year. And he has very few of them for some reason. One week he was in Michigan, and this weekend he'll be in Bethlehem PA. But in a couple of weeks both kids will be at a big meet near Cleveland, so we'll get to see him run there.

And I'm back to reffing soccer games again. I took the year off last year, but earlier this month I decided to get re-certified. I'll pick up a game or two at our local rec league each weekend. I'm trying to limit my games though. For a couple of years I was working several games each weekend and just wasn't good for me - physically AND mentally, and that's why I took time off. So now I'm trying it again, but I'm being careful not to take too many games and not to ref any games that are out of my comfort level. As in too difficult or too fast.

Wow...it's the last day of September already! And here comes October! Some folks are talking about going to the Jubilee in October. And the EGA is having its national meeting in Pittsburgh next week and although I'm not a member, I understand that there will be a Merchandise Mart on Wednesday Oct. 7. I'm toying with the idea of going. Vikki Clayton will be there with her magical fabrics and fibres, and The French Needle will be there, too. I don't need any new designs, but I'll bet there will be some wonderful accessories at her table.

Yikes. I think I've just talked myself into going. Well, as long as I'm caught up at work. And speaking of work, I had better get to it.