Dropping BACK onto the face of the earth

Hi gang. It's me...your long lost stitching pal. You'll hear no excuses. I'm busy, but heck, we're all busy. So I'm going to jump right back in and act like I've been here all along.

First of all, I didn't get to the EGA marketplace in Pittsburgh. Something came up at work and I couldn't get away at all. Sad, yes, but I've had so many shopping opportunities this year and my table is overflowing with everything I've bought. So maybe it was a good thing that I didn't go, except I would have liked to meet Vikki Clayton. Ah well. That's life.

Secondly, I think I misled you about the UFOs in my October 1 post. The little samplers were by The Needle and I, not Prairie Schooler. Amazingly similar, though, right? I don't even know if they are around any more. I couldn't find any charts on the Hoffman site.

OK, moving on to actual stitching that has occurred more recently than 20 years ago, I've finished this: 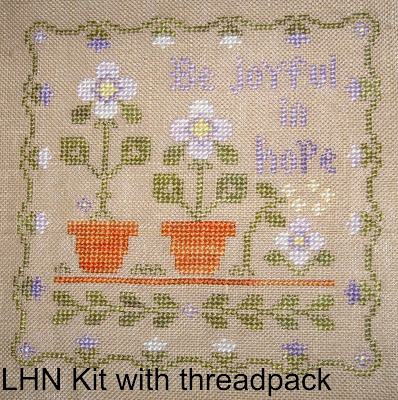 But I'm not happy with the lettering, so I'm going to have to pick it out. Actually, in real life the letters recede into the fabric color even more and are hardly visible. The photo brings them out more...must have been because I used a flash.

I don't know if I want the lettering to be much lighter or much darker. What do you think? I'd be happy to know.

And I've been working on this and it IS a Prairie Schooler. I bought it a couple of years ago from Theresa at Shakespeare's Peddler, when she offered it as a kit with hand dyed fabrics and Crescent Colours threads. Fun, fun, fun and just the ticket at this time of year. 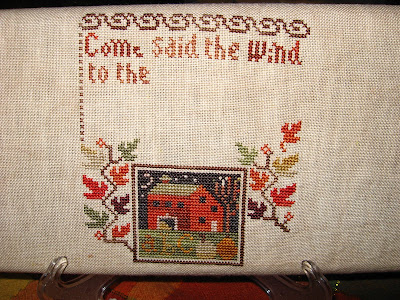 Otherwise, we're having a good time of it here at O'Neil's on the Lake. Dave and I have settled into being a childless couple. (If I hear "empty-nester", followed by a wink-wink and nod-nod one more time I may strangle someone) For instance, our mornings are much less rushed and I actually have time to pack Dave a full meal on the days that he has to work through dinner. We have total control over the "good" TV. Oh...and we've become regulars at the $7 Margarita Pitcher nights at a local restaurant. Which, by the way, we can afford because of all of the money we're saving on the electric bill. So - for instance - I could buy 3 pitchers each Margarita night if I wanted to. And still have enough for cab fare home. That's if cabs existed out here, which they don't. So we stick to one pitcher and spend the rest on really, really bad tacos.

See? All of you with young children? This is what you have to look forward to. Unchallenged dominion over the TV and good margaritas and bad tacos. And you stop missing them so much after a couple of weeks of that and suddenly - life is good.

Besides, they come back frequently enough. We had Colleen home for her fall break over the first weekend of October. First we drove to Delaware, Ohio to watch her run in the All Ohio Championships, where she ran well. Not great, but the conditions were pretty nasty (wet slippery grass and mud...lots of mud) and it was a crowded field with tight turns. And then we brought her home from there. 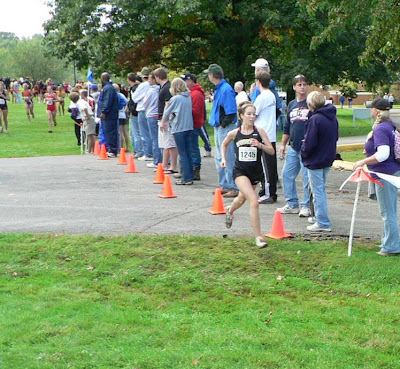 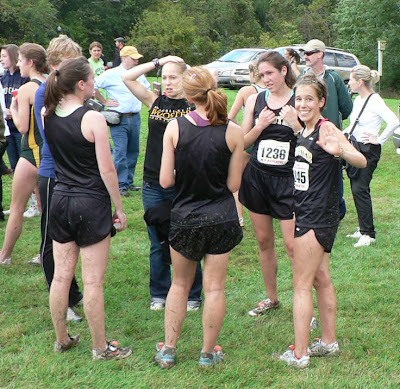 Then this week John was home for his fall break, but he only stayed here Saturday and Sunday and went back to school early. They had some fun stuff planned for the other couple of days. We haven't seen John run at all this year, but he'll be at a meet at Oberlin College near Cleveland this weekend (in fact, both kids will run in that meet), and we'll be there to watch.

Oh, and his 21st birthday is tomorrow. I bought him the very exciting and party-filled gift of - - - a new bike helmet. We didn't take him out for his first drink, because he wasn't yet 21 over the weekend. Besides, I know that it's hardly his "first", and also because the cross country team has a super-strict policy about drinking when they're in season and kids have been kicked off the team in the past ( one young man was kicked off this year already). So we'll have a grown-up style drink with him over Thanksgiving, when his season is over and he's really and truly legal.

Leaving you with a nice photo of Deer Lake (not taken by me, but sent to me by a friend) 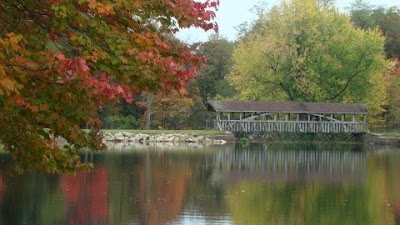